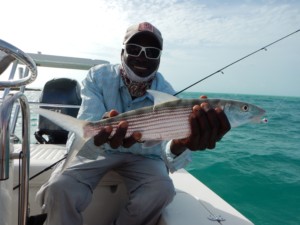 Our guide with the gold at the end of the rainbow. All smiles.

Yellow taxi cabs zipped by with the sounds of angry and impatient drivers shouting and honking their horns trying to make their way into the departure lanes at the Jet Blue Terminal in JFK. Normally I would be in the mix of these maniacal drivers stressed out trying to find a spot where I could wait to pick up a friend or family member without being asked to move but this time was different. This time I was the one traveling. I could hear the shouts, taxi cab horn blasts and the sounds of chaotic New York trail off as I put my headphones on and checked myself in to vacation mode with the sounds of ACDC blaring through my headphones. Yes, I know not the most calming selection of music but it was on my fishing playlist and then again I was traveling to a bonefish paradise.

Located just south of the Bahamas lies one of the most overlooked fishing destinations in the Caribbean; Turks and Caicos. As the Bahamas garner nearly all the attention of big game and flats fishermen, few anglers ever think of packing their rods and heading to Turks and Caicos to wet their lines and fill their minds with a lifetime full of fishing memories. I wasn’t going to be one of those follow the pack anglers. I hopped on a flight from JFK and just 3 and half hours later we were making our descent to the main island of the Turks and Caicos, Providenciales. Sitting at the window my imagination started to run wild as I took in the Turquoise waters that landscaped the islands with shades of Blue that a video camera would never be able to sufficiently and accurately capture. The turquoise waters flushed into pools of nearly purple water fading back to gin clear flats and eventually finding its way into rich navy colored deep trenches. 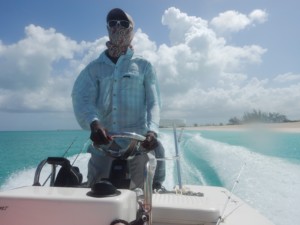 Traveling to the promise land of tailers

“Sir…Sir!” Echoed a stern voice as the flight attendant fought for my attention to remind me to put my seat back to an upright position and buckle my seatbelt as we were preparing to land.
I obliged pulling my seat up and buckling my seat belt never once breaking my stare which became like a euphoric trance as images of monster bonefish darting through flats and thrashing tarpon leaving white holes in the ocean flooded my imagination. The island was a mystery ready to be explored.

After making my way through customs I picked up my rental car drove to the Inn at Grace Bay checked in and began my exploration. Grace Bay Beach was a sight seared into my personal vault of lifetime memories with white sand so fine it felt of baby powder between my toes. I cracked open a Beer and began to absorb the majestic view that lay before me. I was officially on vacation.

The turquoise waters were never lacking in luster and awe to my eyes as I walked down the beach keeping a sharp eye on the edge of navy water that permeated the turquoise oasis. I was looking for some action and sure enough around 5 pm a school of 15-20lb Jacks popped up on the edge of the reef in a primordial feeding frenzy,it was a sight to behold. The school of island Marauders and birds moved on down the beach and soon after they evaded my sight, I watched a 20lb Mackeral making 3-4 foot leaps out of the water in a panicked state. A shark was chasing this fish for over a quarter mile until the Mackeral met his demise, the shark victoriously enjoying his meal in what seemed to be just a flash of time. I took in everything that I had just witnessed and what lay before my virgin eyes and realized I had stumbled upon a time warp. There wasn’t a soul on the beach as far as the eye could see. 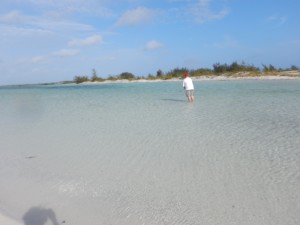 Putting the fly on them

I went back to the room grabbed my cameras and went on the hunt for more pristine locations and stumbled upon a large body of water called the Chalk Sound. Part of a national Park this body of water had the most stunning color of blue one couldn’t begin to imagine. It truly looked like blue ice. Unfortunately fishing is prohibited in any of the national parks as they are extremely protected and monitored however if you are into ecology and enjoy seeking out wildlife then there is no better place to dunk a kayak and explore Mother Nature then the Chalk Sound.

Pirate caves, hidden cays, colonial forts and fish abundant waters were simply teasing me making each minute feel like an hour and each hour a simple eternity. With sunset approaching I took some shots and headed back to the hotel to prep my gear for tomorrow’s adventure. I would be heading to some remote flats at first light with the premier guide on the island, Capt Darin Bain. This man was the essence of a bonefish magician seemingly calling the fish into tight cast able schools at will. I was ready and armed with an ultra light tackle spinning set up. I was anxious to take on the flats.

I met up with Capt Darin Bain at the Blue Haven Marina and off we went in search of some bonefish. Conditions were poor at best with a stiff South East wind blowing 20mph but it didn’t phase either of us as we sped through a myriad of flats stopping in the mouth of a flat by pine cay and setting up shop. After a few casts working a 1/8 oz white jig baited with a 2inch white grub we had caught a snapper and a small bonefish. Darin believed because of the conditions and stiff wind the fish were being pushed into deeper water and that offering the bonefish sand crabs would be the best bet as per the conditions. So off we went and made a small run to one of the most beautiful slivers of beach I have ever laid eyes on. Pools of gin clear water swirled through pockets of sky blue h2o separated only by a slice of white powder beach that was no more than 20 feet in width. It was a wading fishermen’s dream.

We hopped off the boat waded to shore and while Darin dug up some sand crabs I channeled my inner ninja and silently waded a flat searching for the tell tale ghostly shadows of bonefish. I made several blind casts hoping I’d catch a fish and then my prayers were answered! A school of about 50 bonefish flooded the flat swimming as close as 5 feet from me. I could finally see why they call these fish ghosts as they simply appeared like an underwater phantom of the flats. I stealthily made my way down the beach to cut off the school and quickly caught two 3lb bonefish! The drag screaming and line peeling off the spool as these bonefish fought their weight worth in gold. Simply the hardest pulling fish pound for pound on the flats. After catching a couple fish we hopped back on Darin’s flats boat and steamed over to a nearby flat producing another bonefish before a feisty little reef shark pushed those fish away from their muddy grounds.

I was living the dream crystal clear waters sight fishing for bonefish with not a boat around for as far as the eye could see. I was in paradise on a land forgotten by time. We passed by Fort George and saw the cannons lying on the ocean bottom about a 100 yards off the beach to think these canons were part of a British colonial fort protecting loyalists hundreds of years ago was simply incredible. For a history buff like myself it was like being sent into a time machine.

We ended up steaming to Dellis Cay another uninhabited island and began fishing in deeper water which produced another bonefish before a shark again scared away the fish we were luring to the boat. Off again back to the original grounds by pine cay caught one more Bonefish and called it a day. 3 hours of fishing produced memories that lasted me a lifetime and this wasn’t even the season for Bonefish. I am traveling back down here in February to target some monster bonefish in the height of their season and I am unequivocally sure that I will not be disappointed.