Thursday morning was an early one as I jumped out of bed at 3;30 am to do my last minute rigging and get on the road to meet the twins to get down to Point Loma in San Diego. We were headed to meet Ali Hussainy of Bloody Decks website for a day flying the yummy flyer Looking for a shot on the Bluefin bite on the ridge. We found our way down to Southwest Yacht Club where Ali was waiting to blast off on his boat Tuna Jihad and off we went in search of the monster Bluefins.

One point to make is in all my years of fishing the west coast which is 40+ I have never witnessed what is going on this year with a abundance of 60 to 200+ lb Bluefin tuna that have been laden on the outer banks. The original push from the south saw them come into the inner banks and within 4 miles of shore to the delight of all the skiff fleet which ended up being some of the best big game fishing seen by west coast anglers ever. These bigger Bluefins have moved to the out side banks 40 to 50 miles off shore traveling up and down the ridge in search of red crabs and fin baits when available.

As we rolled up to within 5 miles of the 182 we started seeing a variety of Yellowfin from 10 lbs to solid 100 lb fish blasting bait balls with no other boats around. We ended up hooking four and landing two school size fish of 25 to 30 lbs. Great fun on the new Valiant BV-300 with 40 lb braid which made it interesting for those catching them. We did not come to catch these guys but we had a bigger target to aim at, a west coast Bluefin tuna in excess of 200 lbs which had been showing itself on a regular basis with few lucky anglers landing them. We pointed the boat at the promise land of the 43 spot up west to try our luck out with the yummy flyer which is a plastic flying fish lure with either single or double hook rigs on a 300 or 400 lb leader that will be clipped onto a Seeker OSP 3X rod and an Accurate 50T with 130 lb Blackwater braid plus 130 lb flouro leader to a swivel. The set up of choice especially if these bigger animals in excess of 300 lbs are roaming around with the opportunity to get a bite. 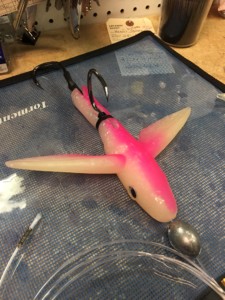 With a good amount of fish showing their face on the 182 we started our trek towards the west we busted out the Giros and started looking for the bigger models on top. Once we got up on the bank we started metering red Crab at 300 feet with mixed groups of tuna from 150 to 250 feet. We started to see small groups of bigger fish which got me and Ali talking about the tides and possible bite times. We were not far off of the time as the tide was at 3 pm and we had action approximately at 2;30 pm. When flying the kite your number one priority is to watch the bait and kite simultaneously to see the bite. I had been locked on the bait for about 2 hours solid through a few turns, readjustments and then Ali had the boat headed West up hill again. As we headed west we started marking fish full speed in and around 300 feet but pretty much every couple minutes. We were outside the high spot with the kite on our port side and Ali said”These fish are higher in the column” the kite was 150 yards from the boat in open clean water but we knew the fish were spread throughout this area. Within 2 minutes of Ali’s observation I saw a giant blowup under the kite looking directly at the kite and saw no downward movement so he missed the Yummy. Another full body blast saw the kite dip and the line go out of the clip which resulting in some fast winding to get tight with the fish and he is on. 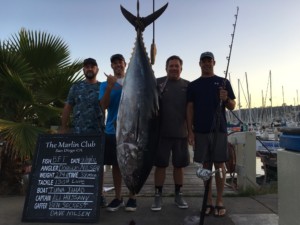 The Crew with their Big Bluefin Tuna

Fish was hot right off the bat so we get Doug settled on the rail in the cockpit to gather line which we needed badly. The kite was 150 yards from the boat and another 150 yards from the clip back to the bait. That being said having drag and turning the handle with 300 yards off the reel at the start is super important to keep your catching dreams alive. Doug did a great job of getting line back on the reel and we finally spun the boat so he could walk up the port side and get him situated on the bow with his rail road in position to put major heat on the fish. Bluefin Tuna are extremely squirrelly and constantly change direction making it extremely hard for the angler sot stay in one spot on the rail or in the harness. Ali was able to show his boat handling skills which took the constant pressure off of Doug trying to keep up with the fish and focus on pulling. Around the 30 minute mark the fish did a big blowout in front of the boat so we could see what we were dealing with, leaving all who looked up excluding Doug with their jaws down. At this point I starting making sure we were ready for what was coming so we laid all the gaffs out and quickly discussed the plan with Ali. The 38 minute mark was here and it was time to put the gaffs in this animal so as he moved by Dave had a clear shot that he took followed immediately by me then I handed my gaff to Doug and put the third gaff in the fish for safe keeping. We walked him back to the cock pit not knowing how big this animal truly was and proceeded to get all four of us to pull him on board. We had caught an actual Giant Bluefin tuna of 79″ which to all of us was unheard of on the coast for the last 100 years. This fish had taken myself 9 weeks of catching and blanking on these trips to get the right bite and scoring this fish of all our lives. It definitely takes team work to hooked, fight and land these monsters. We are stoked for the opportunity that was presented to us and will never forget any of the stages of this fight.

Most awesome day of our lives in local waters and hope we get another chance before this is done and over.

Tight lines to you all.