The Twins Behind Accurate TwinDrag Reels 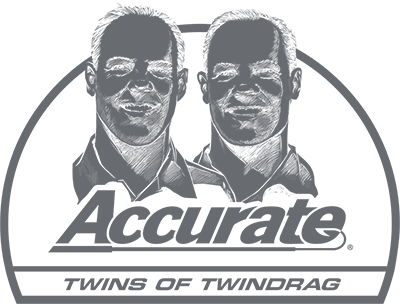 David and Douglas Nilsen are identical twins and the 3rd generation to run Accurate Grinding & Mfg. Corporation. In their younger years, they spent much of their time at the factory learning from their grandfather and father about how to operate lathes, mills and grinders. Their grandfather, Michael DeMarco, was an acclaimed fisherman. Michael achieved the Grand Slam of Billfish back in 1985 and also held the world record for a 56 pound Roosterfish.  Their father Jack, is still very involved in the production of Aerospace products but more importantly tests all of the reels that David and Douglas design and develop.

Born with the ability to create things, it didn’t take long for the twins to come up with some ideas of their own to add to the family business. In the early 1990’s during the downturn in the Aerospace industry, David and Douglas started to design several products for different industries. They designed and manufactured products for mountain bikes, jet skis, golf landscape equipment, and a full line of aluminum clocks and cigar ash trays. The slow economy allowed the twins the time to design and develop their skills on the CNC (Computer Numerically Controlled) machines. Eventually, Accurate Fishing Products was born.

In 1990, they made their first move into the fishing industry with the innovation of Accurate Gaffs. The gaffs sold well for several years, but the Twins continued to look for other additions to the business and in 1993 they designed and marketed the popular aluminum Accurate reel conversion for Penn plastic side plate reels. This was well accepted by the fishing public and created a buzz throughout the industry.

As the evolution continued the first idea for a TwinDrag reel was conceived in 1997. Both David and Douglas knew their fathers love for fishing and thought they would design a reel for him to use on the long range boats that he frequented. After a full year of research, the first TwinDrag ATD Platinum 30 was introduced. It was a long tough haul, but their reels were continuously being improved upon and successfully catching big fish.

As time went on, both David and Douglas saw the opportunity to grow the fishing business. In 2000, the first Boss TwinDrag reels were designed and introduced. These reels were widely accepted by the inshore anglers. With pliers added in 2003, and the well known SR-series TwinDrag Spinning Reels, the once small fishing business was turning into a world renowned product line. Anglers began to look at Accurate for smooth, powerful drags that stop the biggest fish.

In 2007, Boss E-series 2 speed reels were introduced with the unique concept, small reels big fish. With the popularity of braided line, our new reels captured the angler who wanted to achieve this new type of fishing.

The whole package was completed early in 2008 with the addition of Accurate Boss and SR series of rods. These rods were designed to fish with braid and were constructed with a 6 ply construction of graphite / glass. These rods are extremely light and powerful and available in conventional, spinning, and jigging.

The Twins, David and Douglas Nilsen, have spent a majority of their young lives designing and manufacturing products. Their main passion being reels that make anglers dreams come true. Without their dedication and true love of this sport, the Accurate products being produced would not be possible.

As the old saying goes “ Two Heads are Better than One”. This is definitely true when it comes to David and Douglas Nilsen, because without them Accurate TwinDrag reels would just be a dream.