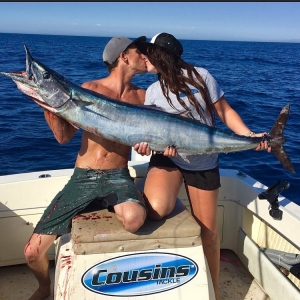 Rob and Dallas with their payoff after five weekends and 110 miles of trolling.

The 2015 saltwater fishing season brought southern California an abundance of exotics never seen in local waters. The first push of gamefish were Yellowtail that bit through the holidays and are still biting in a lot of inshore haunts. They were followed by mass numbers of Bluefin that ranged from schoolies in the 20 to 40 lb range, to bigger models in excess of 200 lbs. The infusion of tuna brought yellowfin tuna that were captured over the 100 lb mark within 10 to 20 miles of the local southern California beaches. This was the first time in at least 100 years we have seen local waters harboring trophy fish of a lifetime. The Billfish made their presence known with the best Striped Marlin fishing ever seen in local waters with 10 plus fish a day boated in the channel islands bite as well as several other spots that went off. The highlight of the Billfish bite was several blue and black marlin taken in the 400 to 600 lb range including a new state record Blue Marlin that went around 660 lbs. The bite continues, but the most sought after fish this season has been the elusive Wahoo which has shown up in numbers throughout the southern California bight for the first time in recent history. There were a few last year but this year it’s a daily occurrence right now to hear of several being caught in local waters on private and day boats out of the local landings.

The Wahoo fishing here in So Cal has really started a buzz with dedicated fisherman spending lots of time and money pursuing this toothy adversary. Many hours have been spent to catch a single fish. Accurate Pro Staffers Rob Fischer and Dallas Clifton spent 5 weekends, ten total days, trolling 1100 nautical miles before they got one to stick and landed a fish in the 70 lb range. For those anglers with this type of dedication, we offer a few points to help increase your percentages in getting bit and landing a wahoo.

Brandon Hayward with a local Hoo on the plug.

After spending a lot of time on the water getting a few bites and talking with several other successful anglers this is pretty much what everyone is using. Wahoo have very hard, boney mouths, which is impossible to drive a hook into without some drag. Most of the guys fishing the Hoo’s are using 30’s and 50’s with 80 to 130 lb braid just for the drags on 6 1/2 to 7 foot,  XH or XXH rod actions. The key is to get enough drag on the fish without any additional action on the rods. A group of us have been using the Boss BX2-30N with 65 lb braid plus a six foot piece of 80lb leader, and the BX2-30 with 80lb braid with 80 or 100 lb leader. Both setups are coupled with a 6 1/2 foot rod rated for 40 to 80 lb test. Calstar, Seeker and Cousins have excellent blanks to consider when searching out a rod. One important thing with the rod is that it has to be fairly stiff to apply the pressure to drive the hook into their jaws. Most of the anglers hooking fish are doing it with the boat. You hear the rod go off, keep the boat in gear and give it a little more gas until the fish is really taking some line off the reel. We are keeping the boat in gear even while we are winding the fish in. Another key point is to keep the rod loaded and continue cranking until the fish is in gaff range. Quite often you can wind a fish to the boat and once you gaff him the lure falls right out of his mouth. Super important to keep the line tight and the reel loaded so if you have to use the boat, you can do it.

Some of the lures being used right now include Marauders in purple and black, orange and black(Tony the Tiger), or a Mackerel color and Jet heads with skirts in Purple/Black, Pink, and Mean Joe Green(Green and Black). All lures are being rigged with either cable or wire in the 175 to 250 lb range. Hooks of choice are single 8/0 or 9/0 with a open style design to get more bite on the fish. All the Marauders have swivels attached to the lure and hooks attached with 150 lb split rings. The Jet heads are stiff rigged with cable or single strand wire with either single or twin hook rigs. Most all of the rigs have at least 3 to 6 feet of wire in front of the lure just in case there are two Wahoo, the second one doesn’t try to grab above the lure. Remember, do not use shiny silver swivels or clips. They will attract attention of following fish and they will give it a bite. Use black swivels and snaps to be stealthy. Guys are using high speed plugs as well rigged with single hooks. They include Rapalas, Yozuri and Williamson. Deep divers are the key to success. They are also catching a few on marlin jigs, where it might not be a bad idea to stiff rig a few with wire just in case. Most of the guys are trolling the lures between 7 and 9 knots to cover ground. Figure out what works best for you.

Spending time on the water helps a ton, but listening to available information from your friends, websites and reports will increase your ability to make a better educated guess. Some of the tools to use are temp charts; looking for warm water edges around high spots and canyons is really productive. Any sort of current breaks where you see a nice temp break could be a very good neighborhood to focus on. I usually troll back and forth over the break going wide in a “Z” pattern. Bites will occur as you turn and as the lures go into the clear blue water without the prop wash. Kelp patties have also been very productive while trolling. We circle the patties several times and this has produced a lot of fish. Some kelp holds and lately if I see one with the little yellow tail that means the predators are around. This year there was a week that one of my friends had several bites, catching two wahoo in 140 feet of water. That is literally right on the beach. Wherever the bait and water temp are within the Hoo range, they will be present. If it looks good, fish it. Other factors that help with fishing exotics is the tides and the new moon. An hour before or after the tides seem to trigger bites so keep it in mind before your next trip.

Things to think about

These animals have very sharp teeth and need to be handled carefully. Once you gaff them before putting them on the boat make sure everyone knows one is coming aboard so they can clear the way. Once on board, it’s a good idea to use a fish bat on them or spike them in the brain. People usually get hurt by dead fish because they bump into their teeth as the mouth usually remains open. A good idea is to tape their mouth shut with electrical tape. This will help any body on board from getting a gnash of a lifetime. Prior thought and planning before you launch the boat will help you catch more fish as well as alleviate any possible wrong doings.

Hope this information helps you catch a southern California Wahoo.

Until next time. Tight Lines.