Conservation through Fishing: Future of the Sport 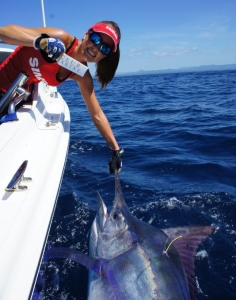 Marlin being released with a Billfish Tag

With the epic season upon us here on the west coast we just wanted to remind people that its fine to keep what you can eat but almost every day at the ramp there are anglers exploiting the fishing conditions and letting fish go to waste for no other reason than a picture. If you are going to catch fish make sure you take care of them by bleeding, gutting them and getting them on ice. By leaving them on the deck you are sacrificing the quality for future consumption. You want the best table fare, take care of your catch. 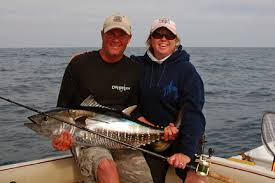 Catch and Release has been a hot topic over the years but it has definitely been embraced by recreational anglers more and more every year. I was fortunate enough to work with Bill Shedd at AFTCO when he developed Tag A Tuna For Tomorrow with the help of National Marine Fisheries Service and the support of the IGFA. This tournament helped bring light onto some of the problems that the fisheries were having in the 80’s and earlier. With the foresight of a few, the catch and release ethic was taught to fishermen throughout the world that adopted it and made a difference. You hear about the Marlin, Tuna, Sailfish, Sharks and other species being tagged for scientific reasons to collect specific information that includes Lifespans, Population Distributions, Growth Rates, and Migration Patterns. This information is important for the Biologists trying to come up with actual information. This is great information but the main focus of this blog is to let anglers know that if we want to continue to have healthy stocks of fish we need to do our part in releasing gamefish. We do not have to tag fish but just be more aware of releasing fish we do not plan on eating. I was out with a couple friends the other day and we caught more than our share but after we each kept a couple school tuna plus a dorado each we released everything else we caught. Even if you hook a few fish deep they have a better chance in the water than on the deck.

Some the the species we have right now in numbers on the west coast are perfect candidates for release. These fish include small bullet tuna, rat yellowtail, small Dorado, and stripe marlin which are not the best table fare. With the El Nino in full effect, the yellowtail you see on the paddies will end up inshore so the more little guys you let go, the more opportunity to catch a decent fish in the next few months. We are definitely not on a soapbox trying to tell you what to do with your catch, but more so to get you thinking about how we can help ourselves versus having the government come in and tell us what we can and can’t do with our fisheries. It has happened with the recent closing of fishing zones throughout both coasts known as MLPA zones.

So next time you are in an epic bite catching good table fare take a minute to think of future trips and let a few go. This is a great way to help our stocks as well as protect us from outside management of our past time, fishing.

Hope all your lines are tight ones.

Practice catch and release when you can. Sustain the stocks for future generations.