Accurate visits Norway the land of the Goliaths

Accurate visits Norway the land of the Goliaths. 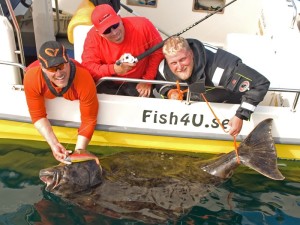 A few years back I was fortunate enough to be invited on a trip to Norway with Sportfishing Magazine.
We have a Pro Staff guy in Tromso Norway Per Jonasson, who has told me for a while about stories of giant halibut over 400 pounds being caught up in the north land so with an invite from a friend we traveled up to see what we could catch. My crew included Doug Olander and his beautiful wife, and John Beath, noted outdoor writer.
My adventure started at LAX and after flying accross the United States and into Oslo (13 hours) with a 8 hour delay in Oslo, ended two hours later in Tromso, Norway.
I was greeted by Per at the airport and driven to his fish hide away, some forty minutes north.

Remember in Norway this time of year there is no night time, its light 24 / 7 and can play tricks on your body. Per had a couple other writers / friends staying with him, Peder and Soren who were very hardcore fishing from 6 am to 11 or 12am everynight catching a lot of fish between 100 and 200 pounds.
My first day on the boat with the guys was very slow with me hooking one nice fish that came unbuttoned quickly. The bait of choice was a savage swim bait baby calico color (brown, gold, and black) on a 6 oz lead head. All the fishing was done in 50 to 75 feet which was completely different than my Alaska fishing. The key to the fishing was you could use smaller reels with braid because the fish coul not spool you in deep water.
My personal experience with big Halibut is they don’t pull really hard and if you keep constant, even pressure on them they swim to the boat rather easily. This wasn’t the case here, these fish would smoke an initial run like a Bluefin and you couldn’t control them unless you put the drag up, and I mean up around 18 to 20 lbs. This was a real workout but it gave the tackle the test that I like to see. 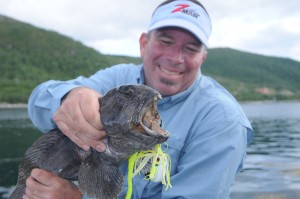 We caught a few nice halibut over the five days but to watch Per on one that taped over 200 pounds with all the drag and land the fish within 15 to 20 minutes was amazing.
I truly learned what kind of drag it took to stop a fish like that and how our little B-197XC could handle it. He has been doing this for a few years with lots of fish between 100 to 200 pounds under his belt, and his reel of choice, a single speed B-197 with a 6:1 gear ratio.
Besides the Halibut we also caught Atlantic Cod and the ugly Wolf fish that looks like a monkey’s head on an eels body.
The weather was unseasonably warm with 70 to 75 degrees during the warmer days and maybe 50 degrees in the morning as we ran out to the fishing grounds.
We all got our chance at the bigger fish and we caught some decent ones but this trip turned into the “One that got away” with that happening to all of us at least once.
I had one fish light me up for several minutes, as we started to follow him with the boat he feel off but he pulled as hard as anything I have hooked throughout my years of fishing.
A real stud, like a pitbull on steroids chasing the local mail man.

All said in done, this was one of the most unique trips I have every taken with a great group of people to share it with.
I would definitely get back to Tromso to chase that Goliath Halibut hoping to land the trophy of a lifetime.
Thanks to Per for his guidance, it was much appreciated.

I hope we are able to get back there and give it another shot some day.

Till the next trip, hope your time on the water is productive.