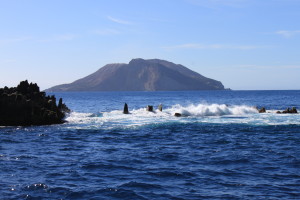 Jack Nilsen and myself took a trip a couple years back to visit our friends at Decoro fishing Kane Tapper, Matt, and Trevor. The basis of the trip was also to spend some time out at White Island which is an active Volcano 30 miles off the coast on the north island off of Whakatane. Kane had been wanting us to come over for round two after the weather killed the last trip the previous year.
We spent our first day getting the tackle ready for the trip making sure we had the power to stop these behemoth Kingies (super charged Yellowtail). Tackle included both BX2 and BX 400’s, 500’s, and 600’s in narrow and Narrow-narrow for jigging. We also had a secret weapon with our BX2-30N with 80lb and a 100lb leader.
The key to these animals is to stop them before they gain momentum in their initial run, if not they will own you are your terminal tackle.

Friday afternoon we left Decoro tackle headed north to hook up with Rick Pollock on the Pursuit a San Diego transplant that came here over 30 years ago to establish a charter business. He has solidified himself as the Kingfish master with solid bookings throughout the year.
We had the Decoro crew as well as New Zealand Fishing’s Mark Kittredge, who is an accomplished Kingie angler with several fish over 60lbs. 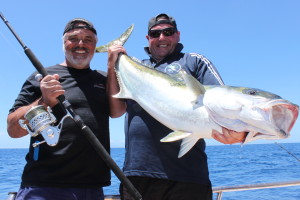 Friday night we spent hours making bait into the wee hours of the morning which resulted in a tank of mackerel which were a combination of Spanish mackerel and Cabito, a Mexican bait fish and some flying fish. After a great breakfast, we headed towards Rick’s hotspots which we fished some jigs and limited bait. I ended up catching one Kingfish on a jig and we had one other caught, both were released. The next couple spots didn’t show any results but as soon as we hit our early afternoon spot things started to heat up. We fished dead flying fish on this spot which ended up being the bait of choice. We landed several Kingfish in the 30 – 40 lb range and myself and the “Dairy Man” got one each over 50 lbs which was my goal I set prior to the trip.

We continued to pick a few more but we ended up anchoring and getting ready for dinner which saw a wide open bite on trevallies to 8 or pounds on 8lb line, what a blast.
After a great dinner we hit the bait fishing seeing several big Kingfish chasing flying fish right in front of the lights, what a sight.
We finished up with the bait and hit the sack at about 1 am hoping to see a real toad in the 100 lb class. The morning showed a slow start but Rick hit the big fish stop of the day before, Matt hooked and caught 5 fish, Mark had a few, Kane and Trevor where definitely making a mark, and I got a couple. We had several fish in the 30 – 40lb class and used up all the bait we caught. We caught a couple fish on the jigs but both dead and live bait was the ticket and without the knowledge of Rick and his years of experience it would have been a tough go. 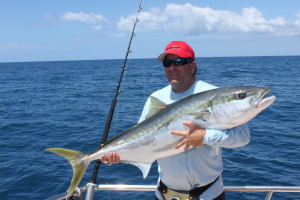 New Zealand is definitely one of the fishiest places I have visited and if you have been here yet I would tell you to book a trip and spend some time chasing Kingfish as well as trout fishing in the rivers and lakes that run through the Islands.
Look up the book Pursuit and Rick Pollock, he is definitely worth it if you want a great trip and excellent fishing knowledge towards these elusive fish.

Until next time, I hope your lines are tight ones.